Under the One UN initiative, the role of the Resident Coordinator Office (RCO) has been enhanced and strengthened to provide the required leadership and impetus for the UN in the country. The RCO is working towards supporting the Government of Pakistan in fulfilling its international commitments, especially on the SDGs. Furthermore, the RCO in Pakistan, as one of the first One UN pilot countries, is also leading the One UN initiative towards a strengthened UN system in the country,  for the benefit of the people of Pakistan with the best value for money.

As the chair of the UN Country Team (UNCT), comprising the head of all UN Agencies, Funds and Programmes, the RCO plays a central role at the country level in making possible the coordination of UN operational activities for development in order to ensure alignment of UN assistance with national development priorities, plans and capacity building in the context of internationally agreed treaty obligations and development goals, and placing the UN centrally in development and international cooperation in the country. The Resident Coordinator’s Office is responsible for the operational activities for development, policy and political affairs.

The Resident Coordinator leads the UN country teams in Pakistan and is the designated representative of the Secretary-General for development operations. Working closely with national governments, the Resident Coordinator and the country team advocate the interests and mandates of the UN system while drawing on the support and guidance of the entire UN family. The RC acts on behalf of the UN system in an impartial way, strategically positioning the UN in the country. The RC upholds and promotes the UN’s responsibilities with regard to preventing and responding to serious violations of human rights and humanitarian law, including the responsibilities of UN entities and staff in this regard.

The UN Resident Coordinator in Pakistan

Mr Julien Harneis of the United Kingdom joined as  the UN Resident Coordinator and Humanitarian Coordinator in Pakistan on 31 January 2020.

Mr Harneis brings 31 years of experience in development cooperation, humanitarian assistance and management. He was previously serving as Deputy Humanitarian Coordinator in the Democratic Republic of Congo (DRC), before which he served as Head of Office for the Office of Coordination of Humanitarian Affairs in Nigeria, UNICEF Representative in Yemen and in Guinea, as well as humanitarian positions in the DRC, Lebanon and Indonesia. Prior to joining the United Nations, Mr Harneis worked in the private sector.

He holds a Master of Studies in International Relations from the University of Cambridge in the United Kingdom, and a Master of Business Administration from the Institute Européen d'Administration des Affaires (INSEAD) in France. 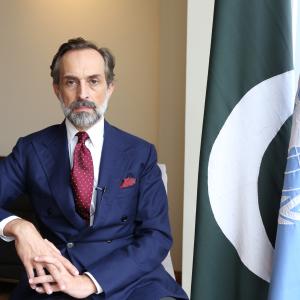